What is the Least common factor (LCM)?
The least common multiple or lowest common multiples is the least number which is divisible by the numbers for which you are finding the LCM.
For example:
The L.C.M of 3, 5 and 6 is 30.
This means that the 30 is the common number that can be divided on any of the numbers between 3,5 and 6 to get the answer in integers.

How to find the LCM manually?
As discussed above, there are several methods to find the LCM. Let’s go through the important ones to understand the basic idea.

Example:
Find the least common multiple of 40 and 50 with the division method?
Step 1: Place all numbers on a horizontal line as shown in the image below.

Step 2: Start dividing the numbers with the least prime number. Write the quotient of division exactly below the dividend. Keep dividing until all numbers are fully divided and the remainder is 1. 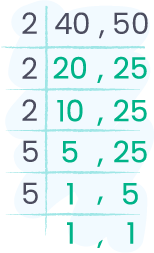 3. Listing Multiples
The simplest way to find the LCM of any numbers is to find through the listing multiples. In this method, you have to list down all the multiple of the numbers and then find the common multiple between these numbers which would be the LCM.
Last edited: Mar 1, 2021
Q

There’s a button on the standard Casio calculator that does it
You must log in or register to reply here.